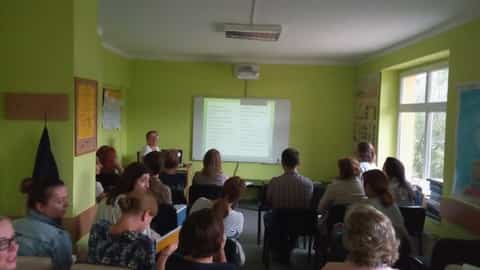 In September 2019 KERIC hosted one of two  STAR E multiplier events for our community. The main focus was to connect with all our teachers we cooperate in local school all over the region and present them with objectives and results of STAR E project. We presented the management changes towards a more diversity sensitive organisation that KERIC is implementing and a handbook which was produced to support this process.  We then introduced the group methods contained in the second handbook which are helpful in sensitizing participants about racism both in a formal and non-formal environment.
We also brainstormed how to use these developed teaching tools. We came up with the solution that it would be useful for students to experience the methods first with our trained volunteers in a non-formal environment of KERIC and the teachers to observe and later re-use them in their classes.
Thanks to this idea, KERIC was able to host several workshops for students of primary and secondary school in September and October facilitated by trained volunteers of our organisation.
The results and good practice were shared between local schools who all received the teaching materials to replicate the methods in classes.

A second multiplier activity was held in October 2019 at the  regional NGOs meeting hosted by the Slovak National Agency. At this meeting Mirka Petrikova, the director of KERIC  presented the activities contained in the Anti-racism sensitization handbook  “Standing together against racism – a Training Handbook” and shared the feedback received by the participants so far.